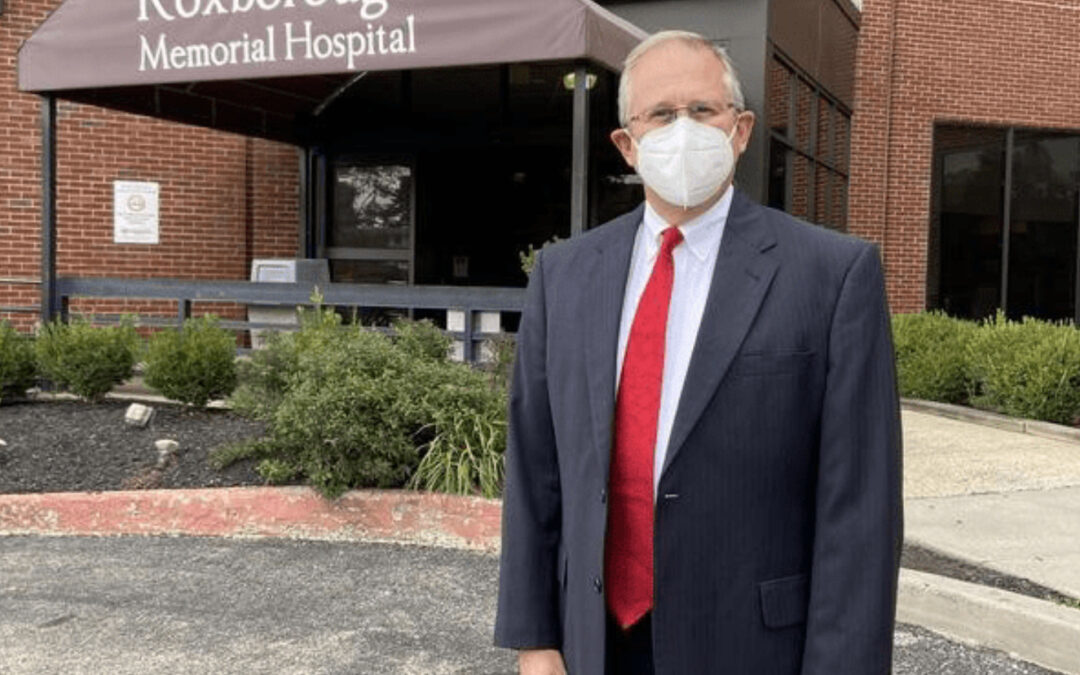 The new CEO of Roxborough Memorial Hospital said he wasn’t too familiar with the Philadelphia health care market before taking the job to lead the 131-bed community hospital.

H. Burton Piper said he only visited the city a couple of times to attend American College of Healthcare Executives conferences.

“I do know it’s a competitive market and there’s been a lot of internal movement with Hahnemann closing and [recent merger activity],” he said.

Piper’s plan for Roxborough to compete with the region’s larger health systems is to continue focusing on the needs of local residents.

“We offer quality care right here in the neighborhood,” he said. “The academic medical centers are there for advanced care, and we have affiliations with Temple and Jefferson. We offer everyday care, and we offer it close to home.”

Roxborough Memorial, which is owned by California-based Prime Healthcare Services, recently invested about $2 million to establish a cardiac catheterization lab at the hospital and another $400,000 to $500,000 to purchase 3D mammography technology.

Piper said both expenditures are part of the hospital’s plan to expand its heart care and women’s health programs. He noted the hospital recently granted staff privileges to a three-woman, independent gynecology practice — previously affiliated with another health system — to support its women’s health expansion. The hospital is not contemplating a resumption of obstetrical care, Piper said. Roxborough exited the service line in 2000, when it was among more than a dozen area hospitals that decided to close their maternity wards citing low reimbursement rates and soaring malpractice insurance costs.

Roxborough is also looking to expand its general surgery program.

Michelle Aliprantis, Prime’s regional director of business development and marketing and communications for the Philadelphia region, said Roxborough Memorial wasn’t looking to add a physician fluent in Russian. “That was a bonus,” she said, noting that while Northeast Philadelphia has the region’s largest Russian population, Roxborough Memorial does occasionally see Russian-speaking patients.

Piper said because Knijnikov has a strong background in bariatrics, Roxborough Memorial is thinking about establishing a bariatric surgery program.

He said all three Prime hospitals in the region are in discussions about how to expand psychiatric care services, particularly in the area of geriatric psychiatry.

Roxborough, like other hospitals, was adversely impacted by the Covid-19 outbreak and the temporarily ban on elective surgeries.

Piper said the roughly 600-employee hospital cared for about 200 coronavirus patients since the start of the outbreak. He said the hospital, due largely to federal CARES Act funding it received, expects to finish this year with revenue close to its 2019 fiscal performance.

“We were able to get through the year without any layoffs or any furloughs,” Piper said.

The hospital received $7.95 million in CARES funds, according to the federal government’s database maintained by the Centers for Disease Control and Prevention.

Roxborough posted revenue of $57.7 million and a net loss of $16.5 million in fiscal 2019, according to the latest data available from the Pennsylvania Health Care Cost Containment Council. As a private company, Prime does not disclose individual hospital financial figures.

Piper took over as CEO at Roxborough Memorial on Oct. 12. He replaced Matthew Shelak, who held the job for three years before departing to become president at Delaware County Memorial Hospital in Drexel Hill.

Piper didn’t set out to become a hospital administrator. He began his health care career as a pharmacist and is still licensed today in two states.

A native of Tennessee, Piper was born and raised in a small town about 40 miles from Knoxville. He spent nearly a decade as a pharmacist at Erlanger Medical Center in Chattanooga. Next, he decided to take on more responsibilities as director of pharmacy operations at Porter Memorial Hospital in Valparaiso, Indiana.

“I became very interested in the operations side of health care,” he said.

Over the subsequent two decades, he worked his way up the administration ladder — holding posts that included vice president of ancillary services of Franciscan Alliance Health in Hammond, Indiana, and executive vice president and chief operating officer of Ephraim McDowell Health in Danville, Kentucky.

Piper, who received a doctor of pharmacy degree from Mercer University School of Pharmacy in Atlanta and a master’s of business administration from Ball State University in Indiana, was running his own health care consulting company when he saw Roxborough Memorial in Philadelphia was searching for a new CEO. He decided to pursue the opportunity and, for the first time, is now a hospital’s chief executive.